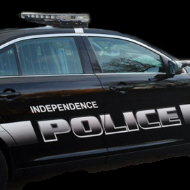 Independence Police took two people in a stolen auto into custody shortly after 11 a.m. in the 11700 block of East Truman road. With the concern of the suspect running and the situation quickly turning into a police chase, IPD contacted the Kansas City, Missouri Police helicopter to assist overhead. A StarChase GPS dart was also deployed on the rear of the vehicle to track it safely in the event the suspect fled at high speeds.