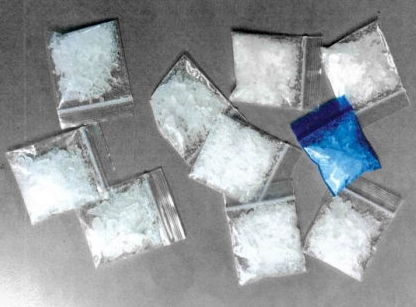 KANSAS CITY, Mo. – An Independence, Mo., woman has been sentenced in federal court for her role in leading a conspiracy to distribute multiple kilograms of methamphetamine.

On Oct. 6, 2017, Hamilton pleaded guilty to being the source of supply for the drug-trafficking conspiracy that ran from Nov. 1, 2013, to Sept. 24, 2014. Hamilton admitted that she obtained large quantities of methamphetamine, which she broke down into smaller quantities for redistribution. The totality of the investigation indicates that Hamilton was involved in the distribution of at least five kilograms of methamphetamine.

A confidential informant made three separate controlled purchases from Hamilton; on each occasion she weighed out approximately 8.3 grams of methamphetamine from a large zip-lock freezer bag that contained multiple pounds of methamphetamine.

Law enforcement officers executed a search warrant at Hamilton’s residence on Sept. 24, 2014, and seized more than a kilogram of methamphetamine, a DVR containing video surveillance of individuals coming and going from her residence, and drug paraphernalia. Hamilton told investigators that she had received one to two pounds of methamphetamine from her source every other week over the past three months (1.5 pounds per two weeks, or three pounds per month, totals nine pounds, or 4,086 grams).

Hamilton is the final defendant to be sentenced among 10 defendants who have pleaded guilty and been sentenced in this case.