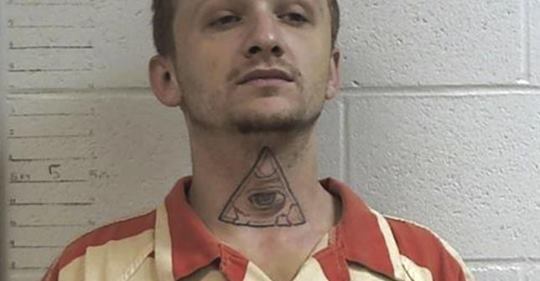 A Pettis County Jail inmate was found missing from his cell block late Sunday night, March 10th.  An extensive search of the jail facility was conducted and evidence of the inmate’s escape was located during the search.

Authorities are searching for Travis Lee Davis, 30, who was being held on $110,000 bond for various charges including  kidnapping, endangering the welfare of a minor, domestic assault, resisting arrest, and parole violation.  Charges of escape are also expected to be filed by the Pettis County Prosecuting Attorney’s Office later this morning.

Davis is described as a white male, 6′ tall and 150 pounds with brown hair and blue eyes.  He has several tattoos including an eye within a triangle on the front of his neck.  He was last seen wearing a white t-shirt and grey pants.

Travis Davis is considered dangerous and should not be approached.  Anyone with information on the escape or his whereabouts is urged to contact their local law enforcement agency or the Pettis County Sheriff’s Office at 660-827-0052.

Callers may also contact the Pettis County Crime Stoppers TIPS Hotline at 660-827-TIPS or submit a tip via the web at http://local.nixle.com/tip/pettis-county-sheriffs-office/