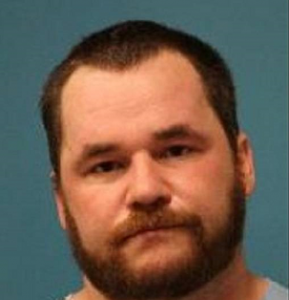 Richard W. Hagerty, 35, of Independence, Mo., pleaded guilty before U.S. District Judge Roseann Ketchmark to one count of armed bank robbery and one count of brandishing a firearm during a crime of violence.

Hagerty was a police officer with the Lee’s Summit Police Department from 2007 to 2016.

Hagerty entered Central Bank of the Midwest, located at 1305 N.W. Arborwalk Blvd. in Lee’s Summit, on Aug. 28, 2018. Hagerty, wearing a camouflage balaclava-style mask that covered part of his face and black gloves, pointed a Glock .40-caliber pistol at a customer and yelled, “Everybody get down on the floor, this is a robbery.” He demanded cash from two tellers, pointing the handgun at them while he was demanding money. Hagerty stole about $7,000 then fled from the bank on foot.

A Lee’s Summit police officer located Hagerty driving a dark gray Mazda on Hook Road and 139th Street shortly after the robbery. When the officer activated his emergency equipment, Hagerty accelerated and a vehicle pursuit ensued. The pursuit stretched from Lee’s Summit to Grandview, Mo., in the middle of the day, on busy thoroughfares. Hagerty drove erratically during the pursuit, according to court documents, by reaching speeds in excess of 100 miles per hour on those busy roads, passing through school zones, and crossing into oncoming traffic.

After the vehicle was finally stopped, the officer gave verbal instructions for the occupant of the Mazda to exit the vehicle. After a short delay, Hagerty exited through the driver’s side door of the vehicle with his hands raised above his head. The officer immediately recognized Hagerty, who was arrested.

Inside the vehicle, officers saw a large amount of cash on the driver’s seat and the front driver’s and passenger’s floorboard. They also recovered the Glock handgun from the vehicle.

Under federal statutes, Hagerty is subject to a sentence of up to 25 years in federal prison without parole for armed bank robbery, plus a consecutive mandatory minimum sentence of seven years, up to life in federal prison, for brandishing the firearm. The maximum statutory sentence is prescribed by Congress and is provided here for informational purposes, as the sentencing of the defendant will be determined by the court based on the advisory sentencing guidelines and other statutory factors. A sentencing hearing will be scheduled after the completion of a presentence investigation by the United States Probation Office.