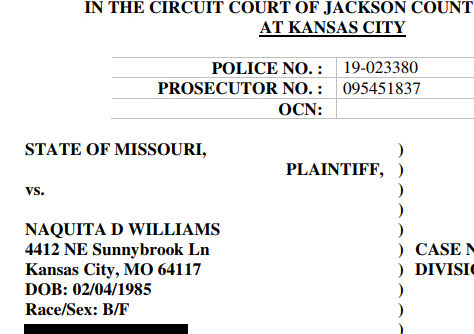 A 34-year-old KC woman who was driving a vehicle in the wrong direction in Interstate 435 has been charged in connection with the vehicular crash early today that killed one person, Jackson County Prosecutor Jean Peters Baker announced today.

According to court records filed today, Kansas City police responded to 87th Street and Interstate 435 on an injury crash and found a person in a Ford Fusion had died as a result of injuries sustained in the crash. The other vehicle was driven by the defendant who was traveling southbound in the northbound lanes of I-435 when the collision occurred. Officers detected an odor of intoxicants and the defendants’ eyes were watery, bloodshot and glassy. Her speech was slurred. A test indicated impairment. A search warrant was obtained to draw her blood for testing.