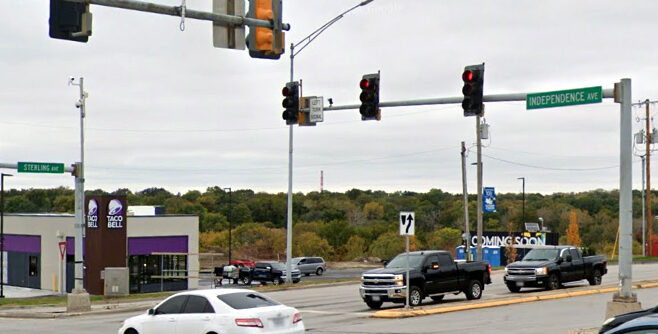 One person is dead and another seriously injured after a crash at US 24 Highway and Sterling Avenue. The crash occurred when the driver of a 2013 Honda Odyssey that was traveling westbound on US 24 Highway ran the red light striking a 2004 Mercury Grand Marquis. Witnesses reported that the driver of the Honda Odyssey was traveling well over the posted speed limit when it ran the red traffic light and hit the Mercury Grand Marquis. The driver of the Mercury Grand Marquis has been identified as Thomas Cooke, 75, of Independence, Missouri. He was transported to North Kansas City Hospital where he later succumbed to his injuries. The passenger of the Mercury Grand Marquis was transported to TMC Hospital Hill and remains in serious condition. After the crash, the driver and three occupants of the Honda Odyssey fled from the scene on foot and remain unidentified. The crash remains under investigation; however, excessive speed and a red light violation appear to be a major factor in the outcome of the crash. Police are asking witnesses to the crash that have not provided a statement to the police to please contact Detective Baltzer at (816) 325-6261.