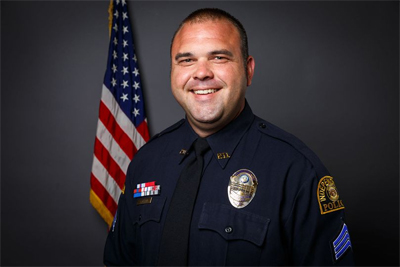 “Sergeant Seth Bosch medically retires from a duty related injury effective February 1, 2021. Sergeant Bosch has served 18 years as a police officer, with the last 16 with the Independence Police Department. He was hired by IPD in 2005 after working two years at another police department. After initially serving as a patrol officer, in 2009 he was transferred to the Criminal Investigations Unit to serve as a detective. In 2014 he was promoted to Sergeant and was assigned to the Patrol Division. In 2017 he was assigned to the Criminal Investigations Unit. While serving in that capacity he helped form the department’s first part-time drone unit and served as its supervisor. He was also assigned as the supervisor of the department’s first Gun Crimes Squad within the CIU. This unit most notably participated in last year’s Operation Legend and continues to be part of the ATF Task Force. Sergeant Bosch also served on the IPD Honor Guard for ten years, the Metro Squad Task Force for seven years and the crisis negotiation team for ten years as both a negotiator and supervisor.In his time at IPD, Sergeant Bosch has received 37 documented letters of commendation, recognition and appreciation. He was awarded the Crisis Intervention Officer of the Year in 2015 from the National Alliance on Mental Illness and a Special Unit Citation in 2017 for his work in the CIU. He has received three lifesaving awards, one in 2007 and two in 2015. Sergeant Bosch was also recognized as the department’s Officer of the Month, twice in 2007 and for a third time in 2008. We wish Sergeant Bosch well in his future endeavors and thank him for his many years of faithful service to this community.”