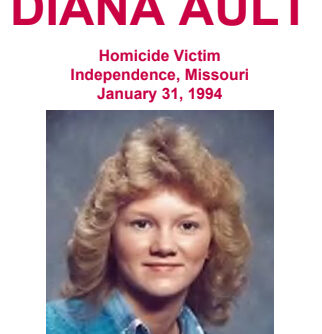 The FBI and Independence, Missouri Police Department is
seeking information regarding the cold case investigation into the murder of Diana Ault
on January 31, 1994.

On January 31, 1994, Independence Police Department officers responded to a
call for service for an abandoned, late-1980’s red Pontiac Grand Prix located at the
Church of the Nazarene, 19800 E. Truman Road, Independence, Missouri. Upon arrival,
officers located a stainless-steel revolver, ammunition and a spent round inside of the
vehicle which was registered to Diana Ault. Officers conducted a residence check of the
home of Ms. Ault at the 19000 block of East 9th St. Upon arrival, officers heard a baby
crying and entered the residence. Officers then found Ms. Ault deceased on the floor of
the residence from an apparent gunshot wound. Her two children were recovered
unharmed inside the residence.

“The re-examination of this homicide, alongside our partners, demonstrates law
enforcement’s long memory and relentless persistence in obtaining justice for victims and
their families,” FBI Kansas City Special Agent in Charge Charles Dayoub said. “With the
passage of time and advances in technology, we are hopeful that a complete
reexamination of this case will bring new details to light to advance this cold case
investigation forward.”

Ault’s two children were under the age of 5 at the time of their mother’s death.
Ault was 26 years old at the time of her death.
The FBI and the Independence Police Department are encouraging the public to
come forward with any information regarding this matter. Even the smallest detail,
which may seem insignificant, could be a key piece in the furtherance of this
investigation.