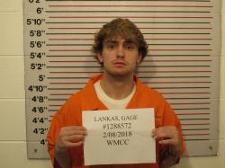 A Kansas City, Mo., man was sentenced in federal court today for possessing carfentanil (a synthetic opioid) to distribute, after a teenager who ingested half of one of the pills without knowing what it contained suffered a nearly fatal overdose.

On Oct. 30, 2018, Lankas pleaded guilty to possessing carfentanil with the intent to distribute.

The teenager survived the incident and told officers he had snorted an oxycodone pill and blacked out. At his home, the officers located 375 pills stamped “XANAX” on one side and a sideways “2” on the other. They also found some other pills stamped “A215.” The teenage victim told officers he acquired the pills from Lankas, whom he met in the Westport area of Kansas City, Mo. When he returned home, he took a few of the Xanax pills and snorted one-half of what he thought was an oxycodone pill (stamped “A215”). He immediately blacked out and does not remember anything except waking up and passing out again in the ambulance. He told officers he had snorted oxycodone before and could not understand his reaction.

On Aug. 5, 2017, Kansas City, Mo., police officers responded to a report of a suicidal party. When the officers arrived at the apartment, they were met by a woman who told them she and Lankas, her boyfriend, had been arguing. She told him she wanted to break up and she wanted him to leave their apartment. She told the officers Lankas threatened to kill himself by jumping out the window and picked up a handful of pills and acted as if he was going to take them. She left and called 9-1-1. The officers placed Lankas under arrest.

Officers found a large stack of white pills sitting on the kitchen table in the apartment. There were 1,332 white pills, as well as 67 partial pills, stamped “XANAX” (later determined to contain alprazolam). There were also 3.25 blue pills stamped “A215” (later determined to contain carfentanil), $6,583 inside a safe in the bedroom, and drug paraphernalia. Lankas told officers that he purchased the pills from the dark web. Lankas admitted that he intended to distribute the pills.