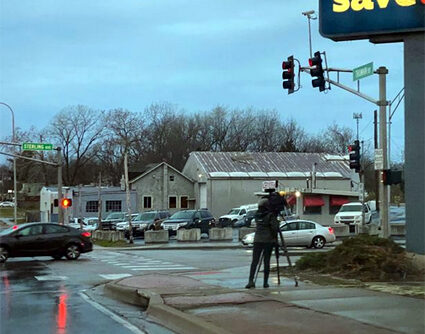 Independence Police officers responded to the area of Truman & Sterling after a possible explosive device was located. Some roads were closed and some residents were evacuated or told to stay inside while the bomb squad investigated. It was determined the device was the hull of a Mark II grenade and incapable of firing. The object was safely removed and streets opened back up.

The Mk 2 grenade (initially known as the Mk II) is a fragmentation type anti-personnel hand grenade introduced by the U.S. armed forces in 1918. It was the standard issue anti-personnel grenade used during World War II, and also saw limited service in later conflicts, including the Korean War and Vietnam War. Replacing the failed Mk 1 grenade of 1917, it was standardized in 1920 as the Mk II, and redesignated the Mk 2 on April 2, 1945.

The Mk 2 was gradually phased out of service as the M26-series (M26/M61/M57) grenade was introduced during the Korean War. Due to the tremendous quantity manufactured during World War II the Mk 2 was still in limited issue with the US Army and US Marine Corps throughout the 1950s and 1960s. The U.S. Navy was one of the last users of the Mk 2 when it was finally withdrawn from U.S. military service in 1969, replaced with the M33 series (M33/M67).