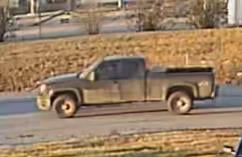 Independence Police Detectives that were working to develop leads regarding the shooting earlier this morning near US 40 Hwy and Valley View road have located a vehicle on surveillance video and would like to find the truck and identify the driver. According to the statement police released, the driver would be considered a person of interest in the case. The vehicle is described as a black or dark green early 2000’s model Chevrolet pickup and appears to have an extended cab with a toolbox mounted in the bed. The vehicle was last seen eastbound on US 40 Hwy from the scene. Police have released images of the vehicle and are asking anyone with information to contact the Independence Police Department 816-325-7300 or the TIPS Hotline at 816-474-TIPS (8477). The victim still remains in the hospital in critical condition with life threatening injuries.